"Do the unbelievers not realise that the Heaven and Earth used to be one solid mass that we exploded into existence?
And from water We made all living things."
-Quran 21:30 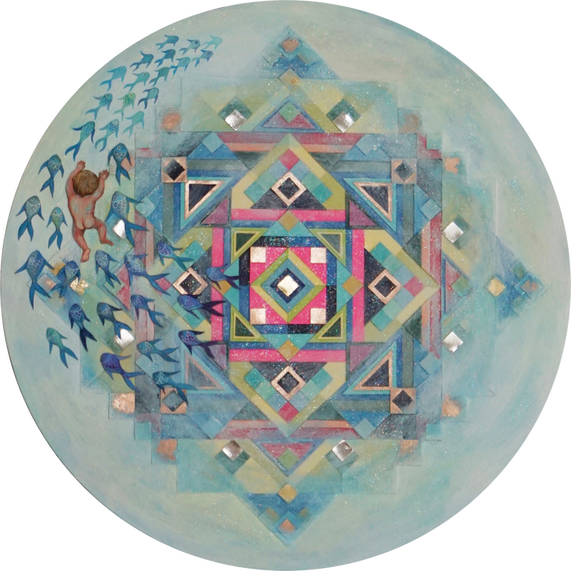 ​Earth is called the blue planet because of the vast oceans that cover two thirds of its surface. Both paintings depict the perfect ecological balance found in nature, and the underlying message that this balance cannot be taken for granted.

This working series depict my love and admiration for nature. I have lived next to several beaches my whole life, and I frequently draw inspiration from my weekly visits there, now with my two young children. I am always so unsettled by the fact that people treat our ocean as a dumping ground just because we do not have to live in it. Pollution from neighboring countries washes upon our shores, and our pollution washes upon another – it is not just ugly, it is also dangerous to those who are vulnerable. Many sea creatures have to live with the direct repercussions of our thoughtless actions.

We cannot change the behaviours of others, but we can certainly change our own, and thus how we respond to the many issues threatening the sustainability of our planet. We have to respect our blue planet and it is ultimately our own responsibility to educate ourselves, change our perceptions and to be aware that our thoughtless actions have grim consequences.

I want my children to be able to picture their own idea of paradise when they go to the beaches. I want them to be inspired by nature & let their ideas run wild when they see the calm blue seas & sandy shores as I once did & still do.
​My concept was simple – I wanted to express an abstract & minimalist representation of the ocean. This painting went through a number of processes, which I actually started in 2017. I initially began the painting with a layer of blue-toned patterns, which I then overlaid with painted waves around the border of the circular canvas. I decided to create a muted, effervescent appearance by brushing over the bright blue patterns with an off-white tone – not completely covering the base colour, but enough to give it that dreamlike effect. I then covered the canvas with a layer of resin to further enhance the notion of being underwater.

This year, I revisited this piece and decided to add some sea life to it. I chose the Hawksbill Sea Turtle as the subject of the painting, which is critically endangered mainly due to human impact. This painting depicts two sea turtles in a state of tranquility, as it is swims peacefully with a shoal of fish. I further added another layer of resin to create the illusion of subtle shadows between the layers.

This image portrays the transient, delicate & beautiful balance of nature – that all life forms must be valued and protected. It is melancholic & dreamlike because someday these graceful turtles will no longer be around. 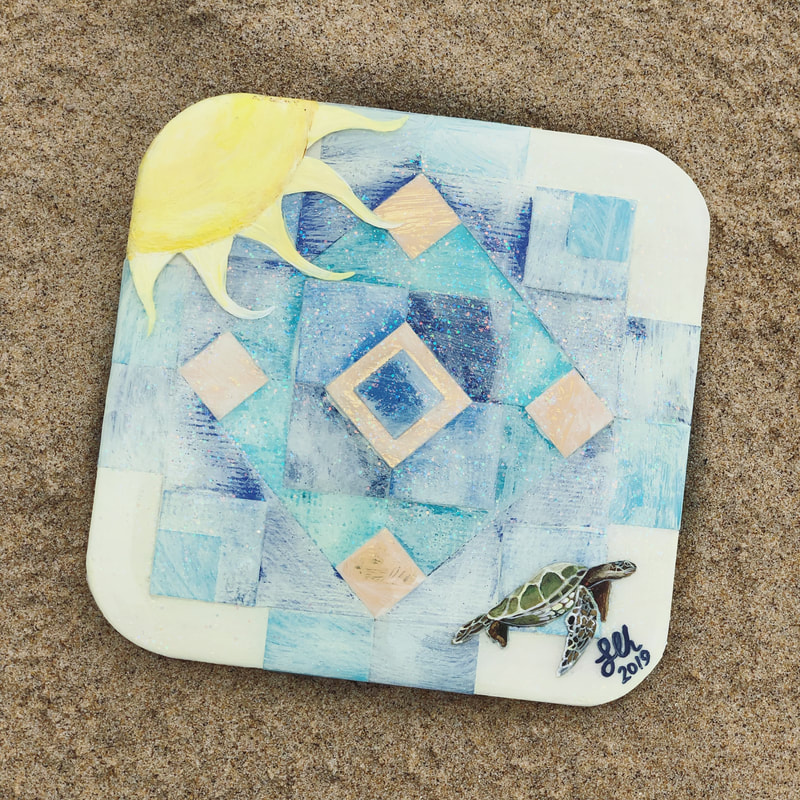 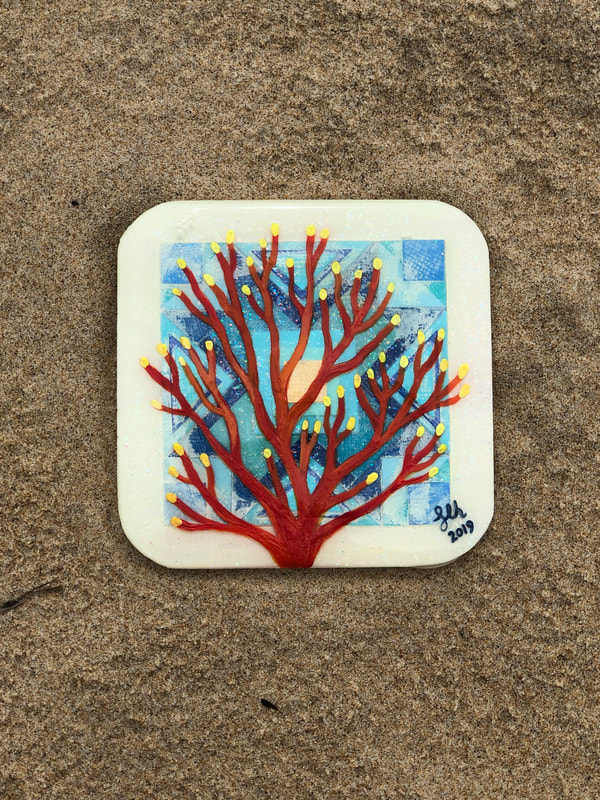 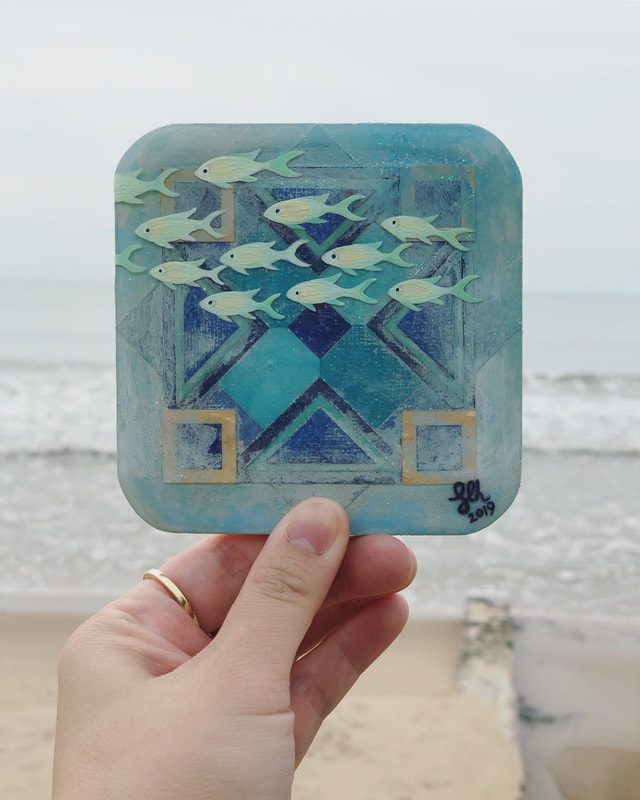 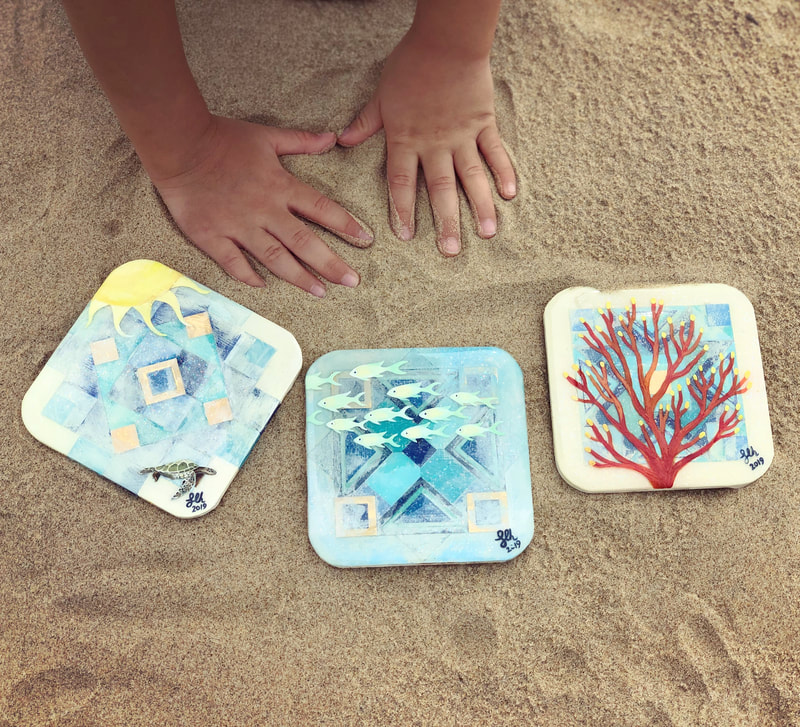 Three original paintings I made for the "Coast-Art" project for World Ocean's Day organized by Kaleidoscope Studio. 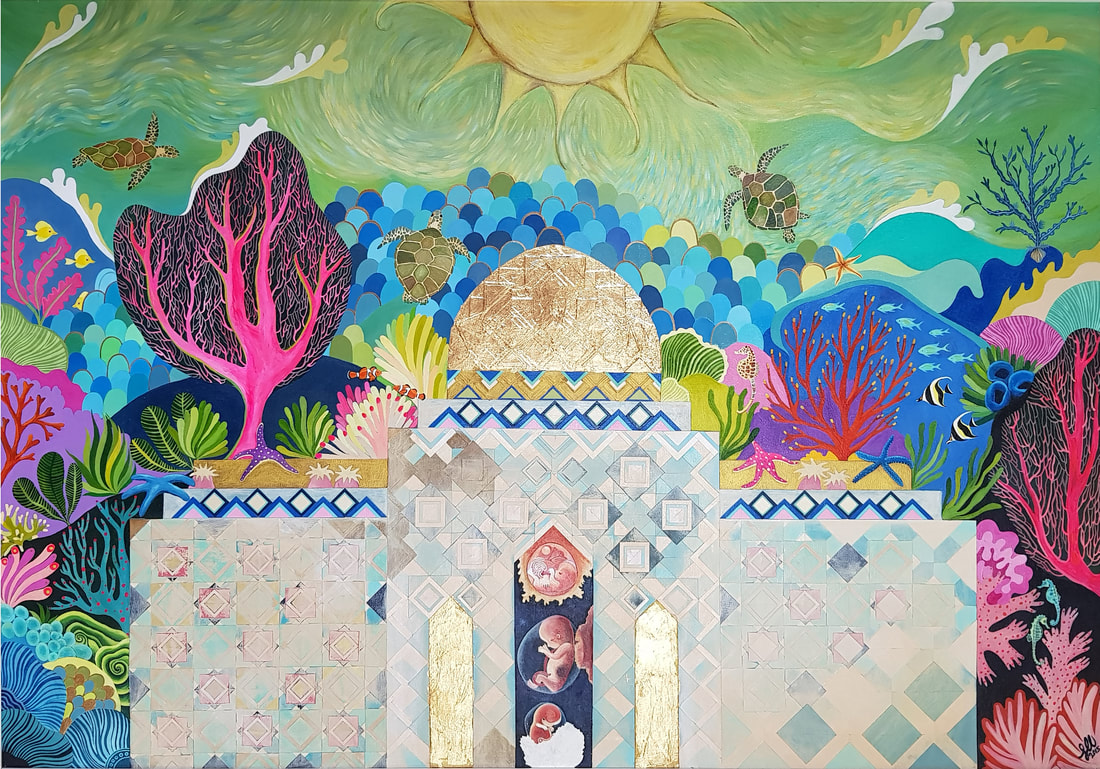 "Sanctuary"
100cm x 70cm
Acrylic, Enamel & Cardstock on Canvas
2015
I was initially inspired by the idea of an 'unfinished’ mosque represented through my abstract pattern-work. I decided to have it submerged in water surrounded by different forms of sea life. I could not get these imageries and the concept of the ocean out of my thoughts, and during my pregnancy I found the process of a growing foetus in utero so uncannily similar to that of the teeming existence in the ocean habitat. This piece is called 'Sanctuary' inspired by the life growing within.
Copyright © 2013 - 2021 www.maziyahyussof.com