I was one of the seven artists/art groups involved in the "Jalan Roberts Floor Mural" project aiming to beautify the heart of our city, Bandar Seri Begawan. Each artist was given one padian boat to work on. The seven padian boats represent the seven ethic groups (puak) in Brunei - Melayu, Tutong, Belait, Murut, Kedayan, Dusun & Bisaya. I chose Puak Melayu and this is the concept I came up with. 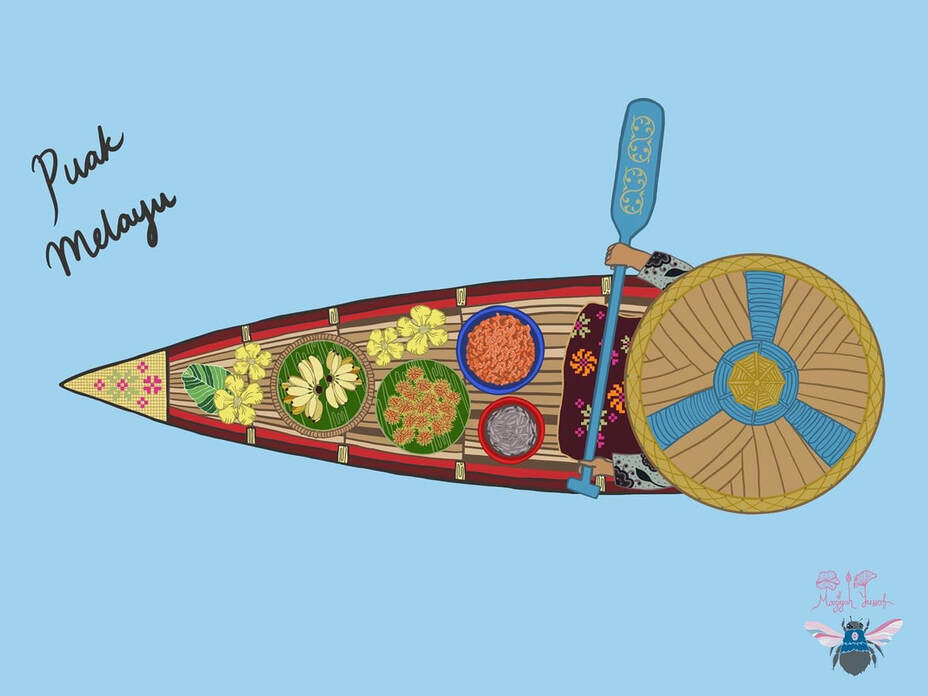 The project came together within two weeks so we had to come up with a design fairly quickly. I did some research about Padians - basically they were women from the water village who used to sell a variety of foods and products on their boats. They would generally sell in demand items from the main land that weren't readily available to people who lived in the water village - a very similar concept to “floating markets”. They wore large hats called “Siraung” which were made of straw, and some had different patterns and designs on it. The hats were quite specific to Brunei because they were much larger in size in comparison to other floating market traders. It makes sense because Brunei can get extremely hot especially during the midday as we have tropical weather all year round.

There wasn't much research available online especially since the padians are virtually non-existent now. Personally, I have never seen a padian in my life apart from the few photographs I found online and in books. I feel honoured and proud to be part of this project as when we were working for the 5 days, there were people from Kampong Ayer and the city who walked passed us and would stop and express their happiness at seeing a past memory come to life.

I decided to focus on the incorporating the Tenunan & Ayer Muleh Pattern onto the boat. And ofcourse I had to include Simpor flowers - the national flower of Brunei. I love how bright and happy looking Simpor flowers are. 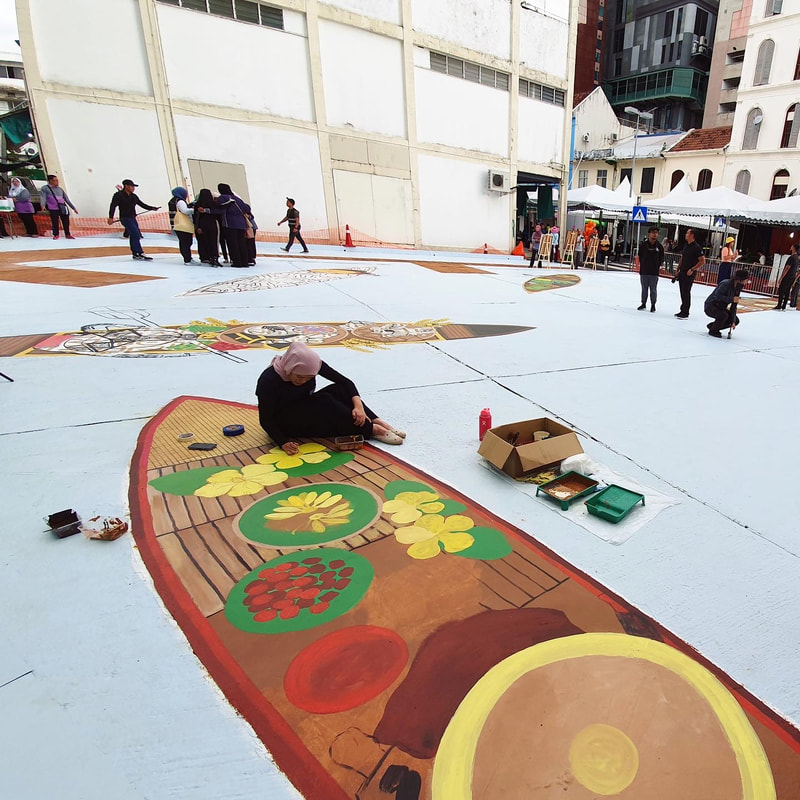 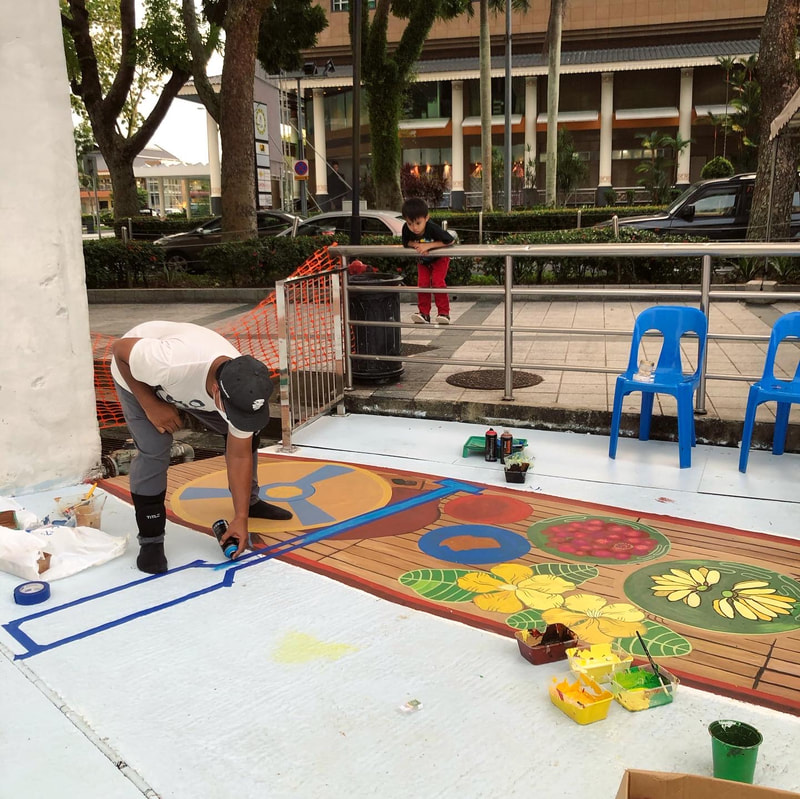 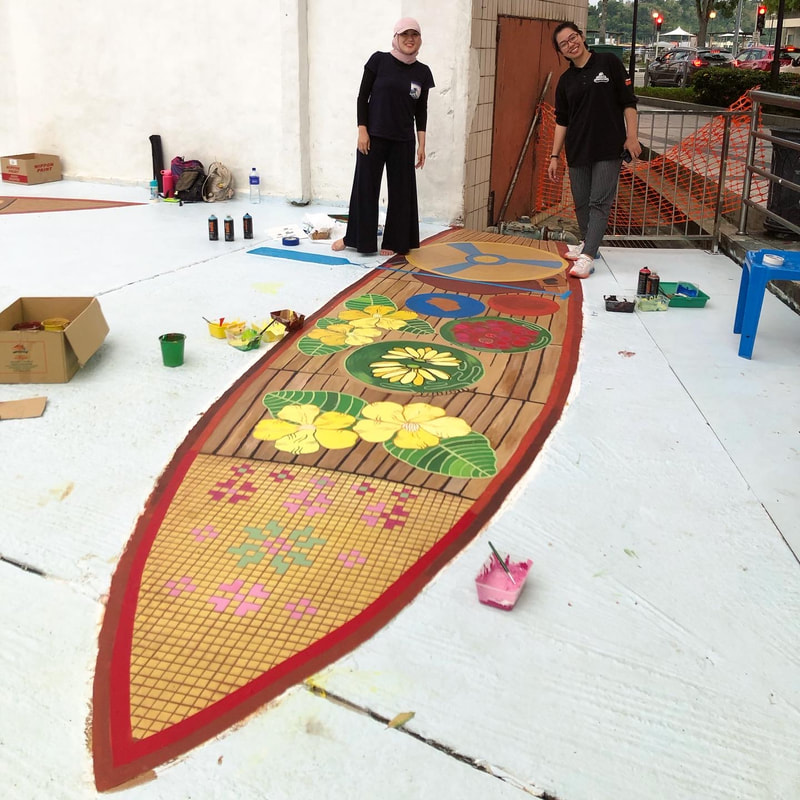 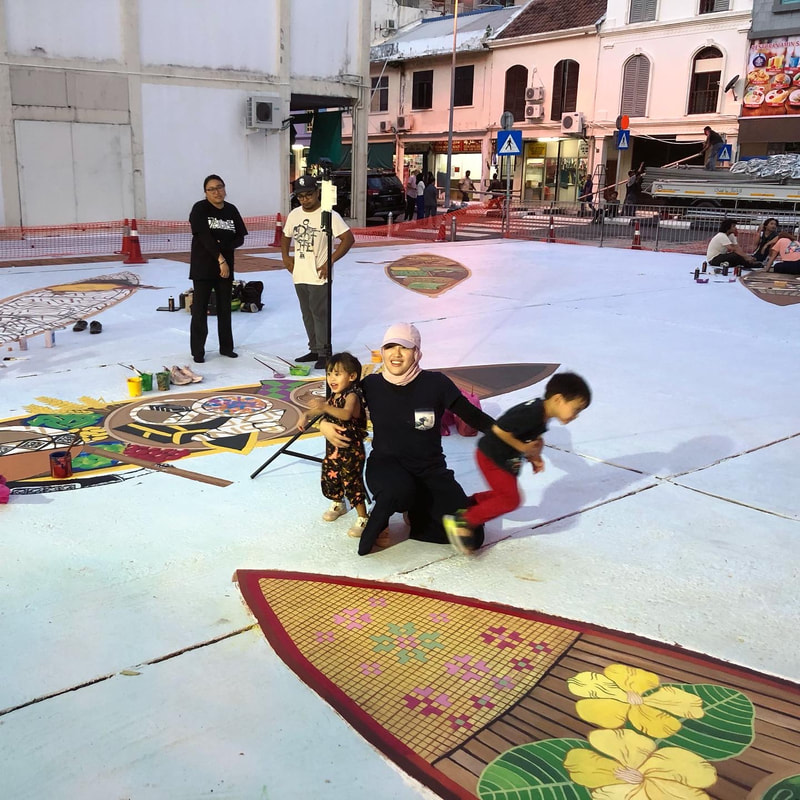 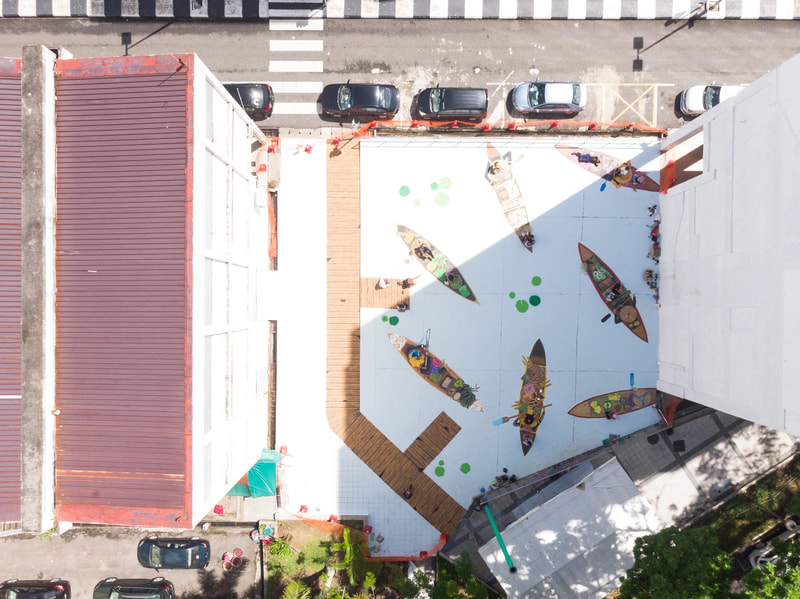 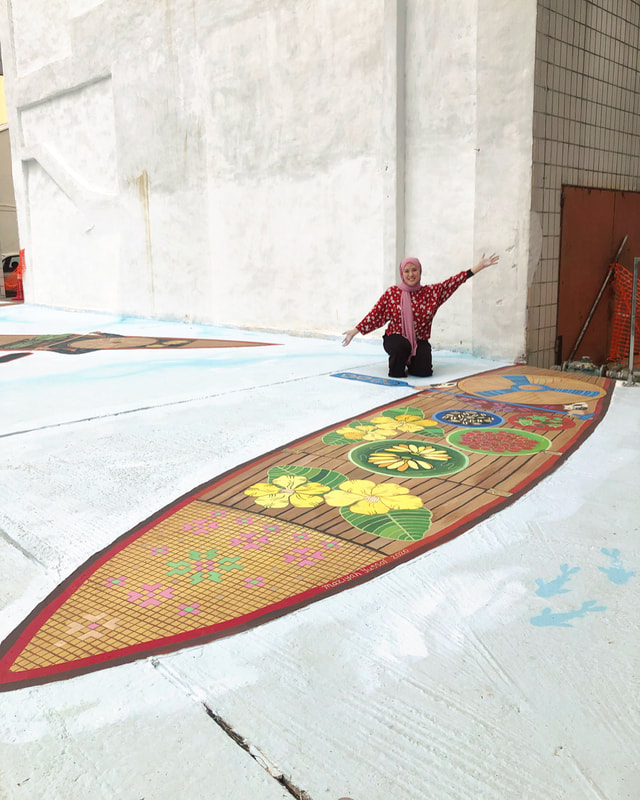 21.11.20 - 25.11.20 .Five days of working non-stop on this mural. We had thunderstorms almost every night which would force us to stop working, but it was such a fun and rewarding project to be involved in. The environment, the other artists and the organizers were inspirational. The drone shot shows all seven boats on its way to completion. Once I get proper photos of the other boats I will upload them - but for now, more updates can be found on my instagram. 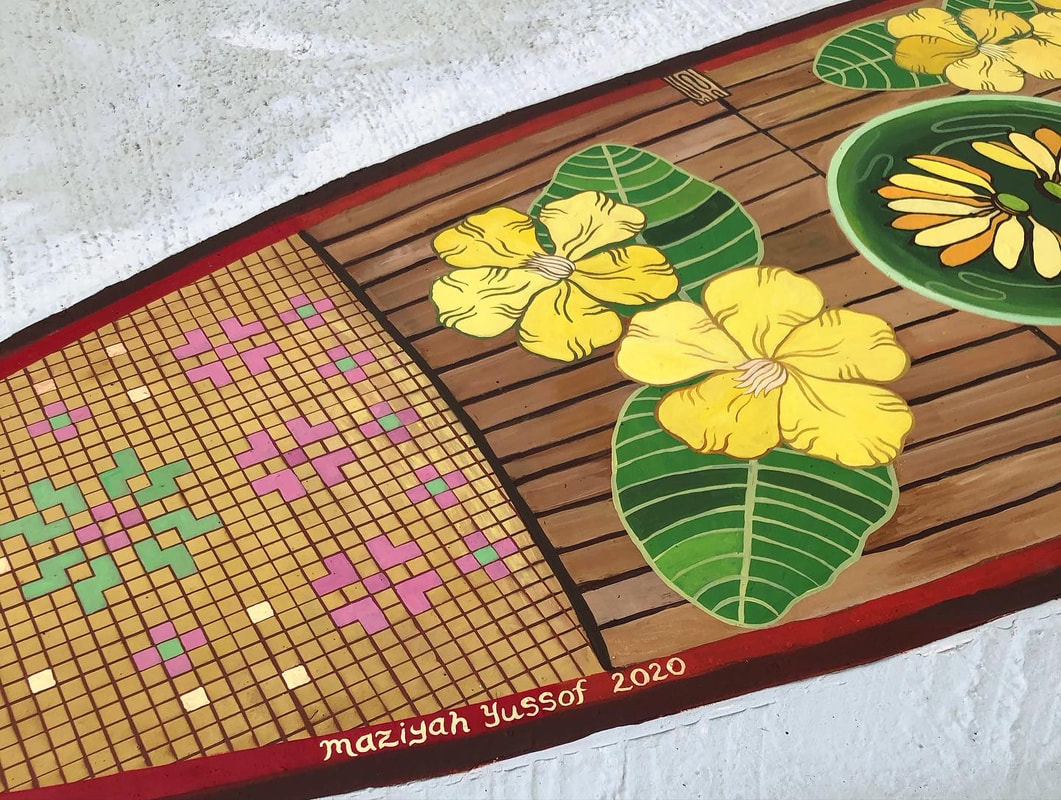 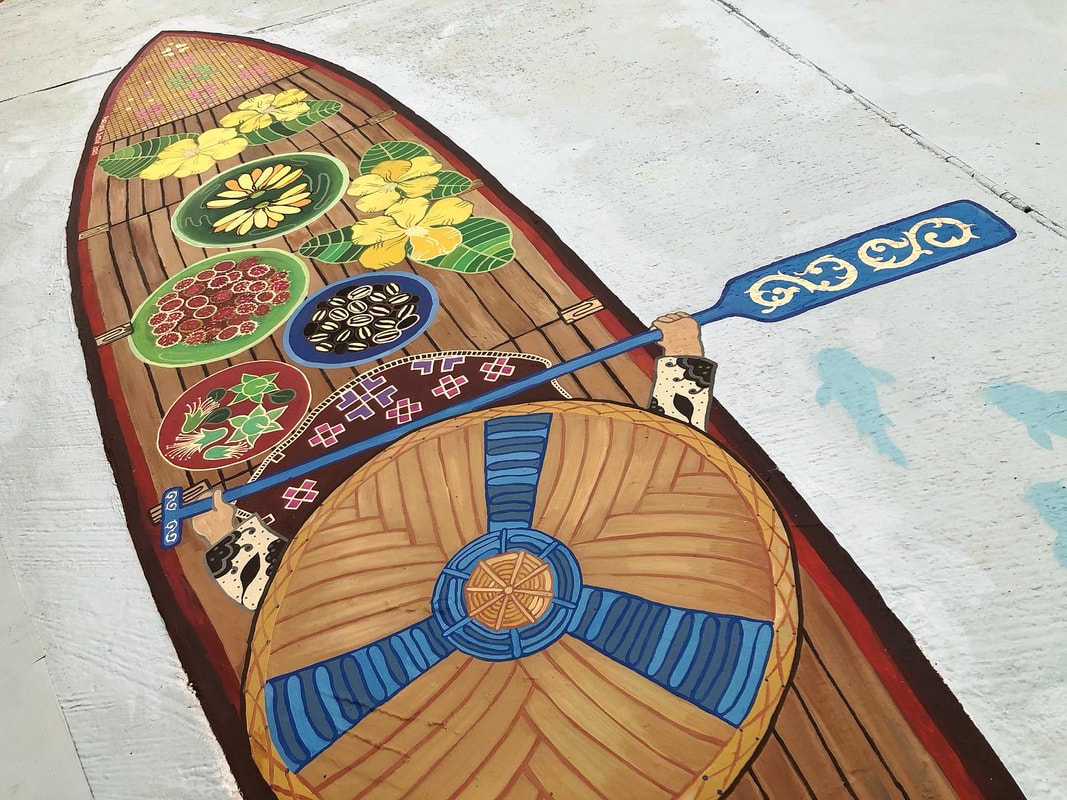